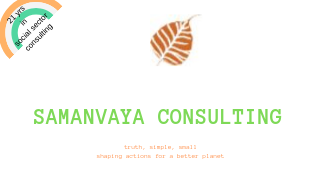 Freedom consistently defined our work culture at Samanvaya. We have always been free to pursue whatever we felt was important at a given point in time. Almost always it had to do with social causes, organizations and initiatives and more recently institutions.

Looking back to 1998 when we started Samanvaya, I wonder today, whether we had an element of "Patriotism"? or to what extent it was a motivation for us. A honest reply is, "I don't think it mattered", we were  happy to experiment working for social causes through a consulting firm. Yes there was inspiration through reading of Vivekananda and Aurobindo to some extent, Gandhi came much later. But, there was no need to justify ourselves with some form of badge or another when we started, all our knowledge on Indian history, studying of India's past 400 years of historical research, our own research on communities and their strengths and extended work with villages came much later.  When we started, we had very less requirements (that continues even today) and even lesser money. We were very happy and  felt free enough to do whatever we felt was important.

We chose whom we worked with freely, regardless of whether they were big or small, regardless of their politics and ideology, whether they paid us or not, only one thing mattered - whether we were comfortable with the  idea and if it had a larger  benefit  to humanity. It is this quest for freedom that gave us the flexibility to shut down work and volunteer time and again for various causes, whether it be disaster relief or safe food campaigns. We always found inspiring people who were happy to work with us without much effort which we counted as a blessing.

Freedom at work, meant no restricts to express our convictions, be creative, to critic, to appreciate, to collaborate, to contribute, shape, laugh, love and participate. When we wanted to organize an annual event on our birthday, i.e., Aug 15th, we  chose to do away with the regular self-congratulatory kind of event and instead honoured  grassroot workers  through the annual "Samanvaya Freedom Lectures", inviting them to articulate freedom in their life and work. Articulating Freedom was as important as freedom to choose whom to work with or what issue to work on.

Today, the sector itself has  become far more complex and gaining understanding on any one aspect means gaining knowledge in several domains. However, the eco-system to freely work in the social sector has started to shrink.  I see this happening in the following ways:

a. there is a continued effort to 'fix' responsibility for all social issues - political, social, ecological or economical. we accepted issues as a challenge, now to blame someone seems to be important rather than resolve issues. divisive strategies benefits most in such situations as clever corporate houses, political parties, faith leaders, all create the image of the "other" with all negative attributes and serve them in different styles and sizes to fit lazy minds

b.  history is no longer a boring subject in our university, every second fellow is an amateur history professor with selective amnesia, picking facts from history that can be exaggerated to justify current political positions or mis-adventures. in fact in many cases, trading selective historical facts is seen as actually addressing an issue, not actually solving it these days

c. you don't need to have any qualification, comprehension, commitment or continued work to form an informed opinion on social issues, all you need is a social media account. We have keyboard pygmies jabbering text with random labels and call that an opinion and demand responses in the name of fair play.

d. violence is accepted as a norm. we used  to look at non-violence as a fundamental Indian idea. now, everyone finds different scaffolding of chosen facts and myth to justify  violence of various kinds inflicted on 'others'. if i write "ahimsa paramo dharma" today, i will be blamed by the right wingers stating that we need weapons and attitude of violence to protect ourselves, by the left wingers to justify 'protecting' people from the State violence, the regionalists for quoting a sanskrit text, some nationalists for daring to quote a sanskrit text, by the warmongers because they think violence is an extended video game and by the senior citizen middle class with their children abroad, because they need something more exciting than the daily news headlines as a laxative as they sit constipated in their sense of irrelevance

e.  patriotism needs to be expressed in symbolic ways rather than serious commitment, a large flag of the Nation flutters in every railway station and airport now, anthem before every movie, i often wonder in a free country, why is there a need to keep emphasizing this Nationhood so much? certainly in the last 20 years I haven't seen any great new threats to the country except greed of the consumers and the exploitative corporate houses with their conniving babu-neta nexus. but, symbolism is used to blind us of this greed and make us part of it, plastic flags to adorn every car front, biryani parties for and extra purchases, preferably in 'discounted' price on all national holidays is the new allegiance to the nation.

Obviously, these are not limited to social sector issues alone today. The growing urban middle class with dispensable income, secure bank balance, children and grand children's welfare taken care of with diverse investments, capacity to articulate, several social media accounts to boot and time to kill is setting the new national agenda of political and social discourse today. unfortunately, it ingests much of its information from the visual and social media and can be manipulated in its understanding and perception based on what is presented.

While work in the social space calls for constant communication and articulation, one often finds oneself unprepared to the kind of responses it entails. Over the past few years I have seen a growing noise of intolerance that is not directed at any issue or stems from an ideology, rather it seems to be directed at this sector itself by a chorus of orchestrated idle minds controlled by media houses that are owned and operated to suit corporate interests.

Shrinking resources across the world means, there is a desperation to exploit more, faster and with lesser accountability. There is an ever increasing need for social sector initiatives and watch today as Nation States everywhere are succumbing in front of the corporate greed. An aware and articulate citizen or social sector organization is a pain in such instances. So, a new band of idle slaves have been indoctrinated through the greatest discovery of modern times perpetrated through the media today, 'the individual choice'. The 'individual' is today packaged through regulation, technology and markets. As citizen, user and consumer, the package defines us as an 'individual' and we seek and give allegiances, lead and follow other 'individual's (often politicians, gods or godmen who themselves are promoting corporate agenda), behave and sing and dance as one or several of the packaged idea of an 'individual'; complex issues and contexts and conflicts, are all shrunk to labels, that which we affix  on people,  with neither an understanding of the label nor the persons.

Our times don't grant us the luxury to indulge in vanity fights over titles and papers. Yet, titles and papers are what we fight over, deceiving ourselves  with exaggerated claims of threat or importance, often looping our fiction endlessly, seeking to alchemy it  into reality. And in the meanwhile, Climate change gives the world  a daily challenge of survival and choices to make, none easy. The consuming, entitle-claiming and gadget upgrading individual is far too pre-occupied to reconcile. Denial is not an excuse but a crime today.

The greatest expression of freedom today seems to be a responsible life both in personal level and at the level of civil life. Responsible in choices we make, in the way we live, in work and in articulation. To work with social challenges today is to address issues for not a location or a community, but, to all of humanity as a whole. Every correction in the larger jigsaw is fixing that one piece of the puzzle, all the pieces are connected. but, to do this we need to escape the packaged 'individual' design that we are presented every day, to escape labels, to see beyond what is sold to us, to see through rhetoric and cynicism, to stay calm with criticism, to measure our own growth and happiness using measures other than growth of corporate markets sold from lecterns to us, to hold on to the idea of Indian ethos which made it one of the greatest civilization, not because it lacked internal issues, but, it evolved culture and systems at different times to address them, it produced great thinkers and workers among people in every century and decade who stood up to articulate to the world, a message of universal brotherhood, peace, love and co-existence. to understand that hatred and intolerance cannot be the legacy of this greatness, that much of it came from inclusiveness and capacity to accommodate, a message that was our inspiration when we started 21 years ago and which looks more relevant today.